Our challenge was to broaden the appeal of the Mustang to everyday Australians, not just petrol heads. The ones who wish they could... but convince themselves they can't.

Being responsible and sensible often drives the choices we make. Life becomes routine and predictable. But guess what? You only get one go round.

Interrupt peoples mundane moments with the Mustang. Get them to think about the choices they're making. To say 'What am I doing? Is this really what it's come to?! Then spark a desire to lead a life that's a little more exciting.

This campaign was awarded the Silver Effie for the 2018 best Media-Lead Idea.

The power of this idea, which was developed with John Pantzopoulos (Art Director) came from its contextuality across multiple channels. Wherever people were wasting time or making a dull choice, whether that was sitting on the couch or attending auctions ‘just to see how much it sold for’, we’d show up and prompt them to ‘Ditch Regret’. By the time we were through, we had over 60 unique executions.

Here’s how we reached our audience.

Our audience indexed heavily in Subscription TV. Each of our spots were designed to feel like a movie trailer; leaving the viewer wanting more. But most important of all, the 8 unique pieces of creative carried a contextual message related to the program our audience was watching. Prompting them to think about how they were spending their time or more accurately, wasting it.

Is your life Groundhog Day? Three consecutive placements after another on Bolte Bridge in Melbourne. 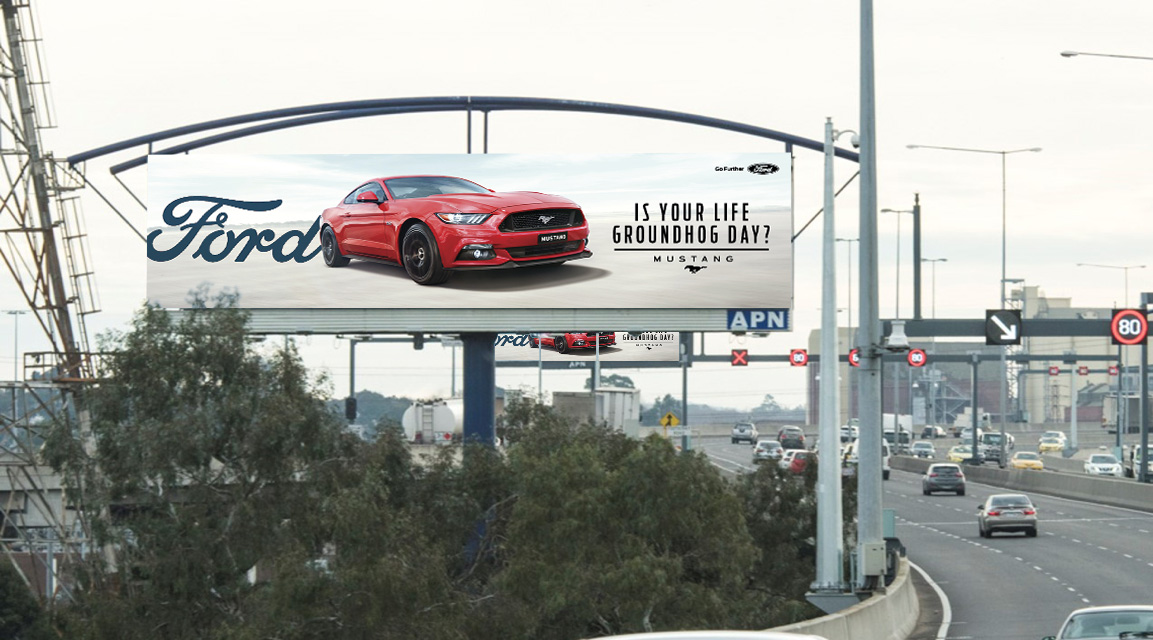 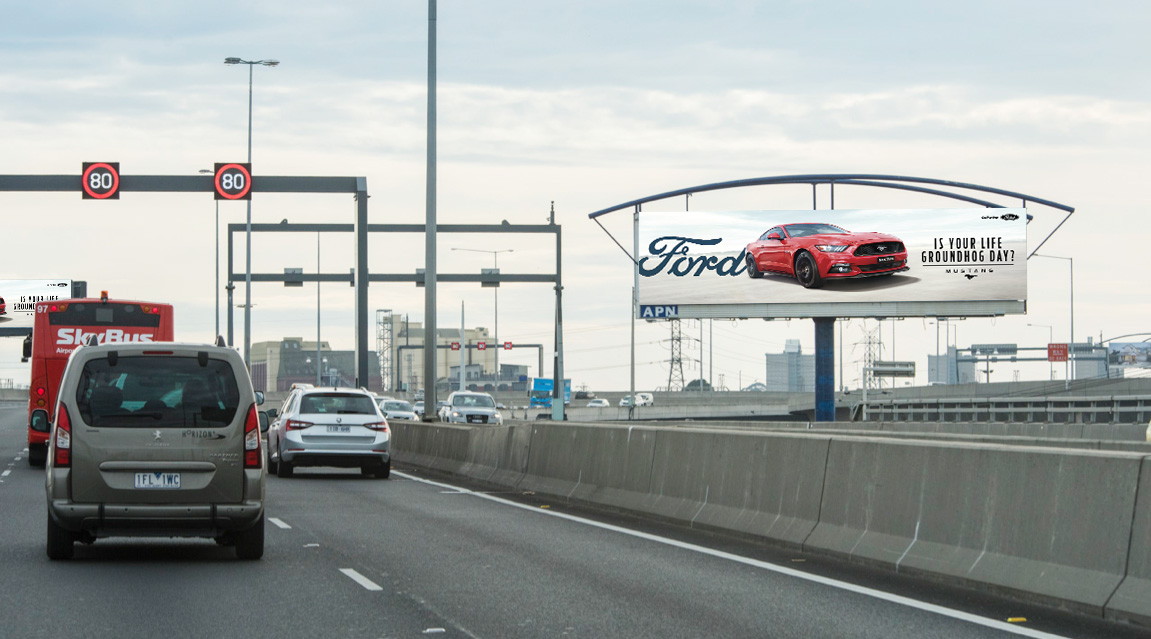 Rather be sitting in something else? Ran at peak hours on congested roads. 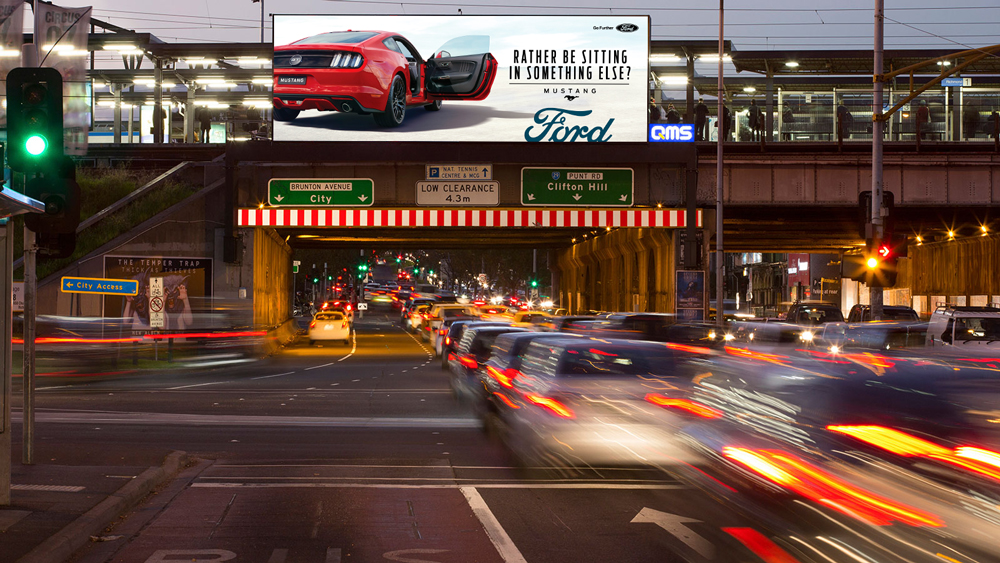 Don’t get stuck in a negative gear. Ran in affluent areas, rife with investment properties. 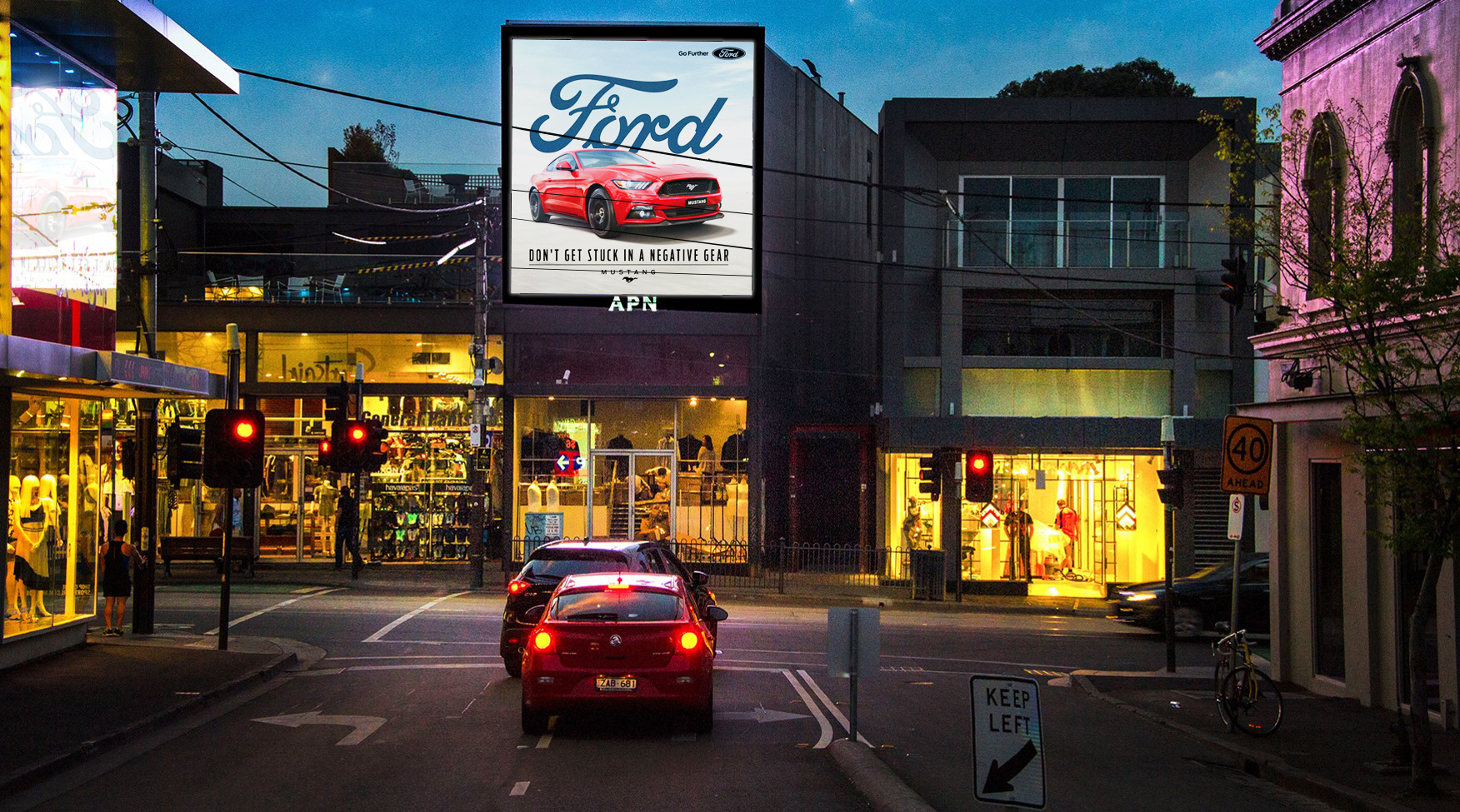 Waiting for a lift or a ride? Ran opposite taxi pickup points at airports. 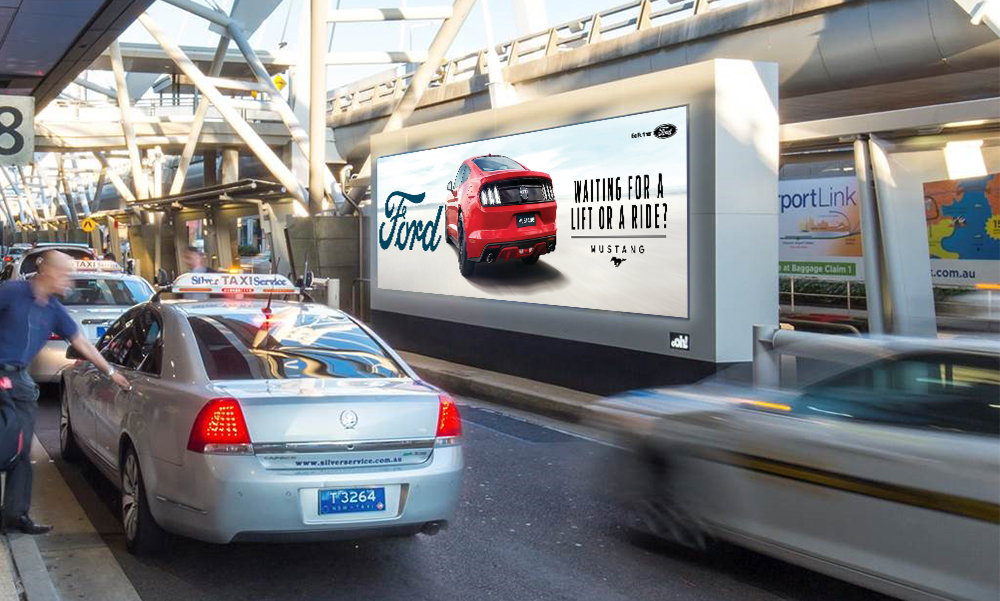 Someday isn’t a day of the week. Ran in high traffic areas. 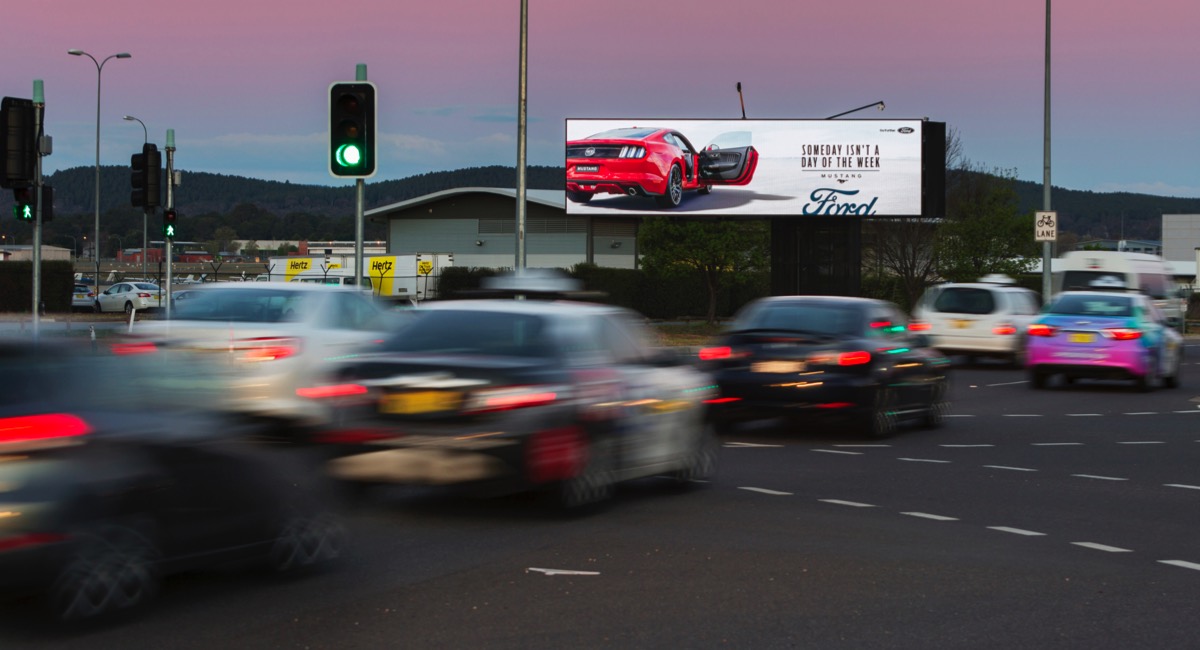 Our digital screens appeared in the most mundane places; following our audience from their weekends, into their working week and back again.

On Facebook and Instagram we sent our audience a variety of messages based on the time of day, user interests and other triggers. Depending on how they interacted with the posts, our audience would eventually served a pointier message encouraging them to test drive the Mustang. We had a total of 4 channels working across 17 assets and lines using video and images.

Mustang unavailable? #Fakenews, You’re not getting any younger: served on people’s birthdays, Talk about Fantasy Football Later: served during the fantasty football finals, Another Sunday on facebook?: served on Sunday of course.

This extended into our digital campaign; contextual digital banners, HPTOs Skins and content across a network of sites and media partners. We ran a tailored campaign for carsales.com.au, which targeting people who were searching for mundane and boring cars, like sedans and SUVs. We introduced Ford to GumGum, a new ad platform that hijacks images and places a banner at the base based on the content.

Do something worth gossiping about. Ran across tabloid and celebrity gossip images. 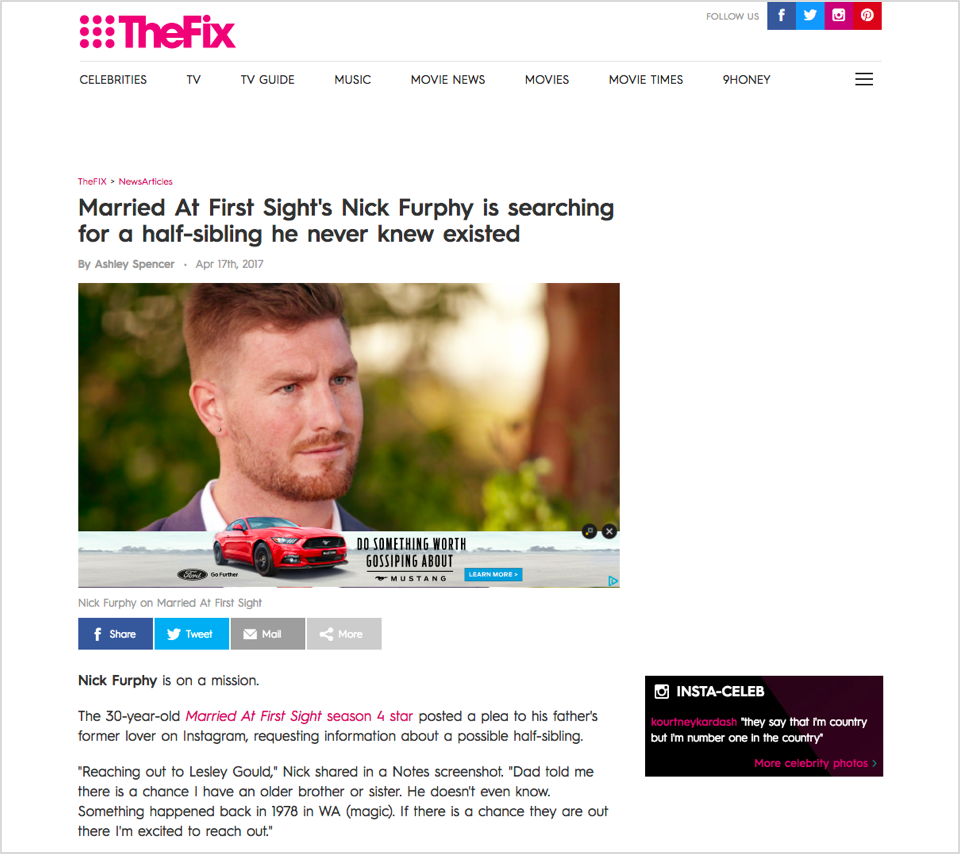 Do you really want a sedan? Ran across images of sedans. 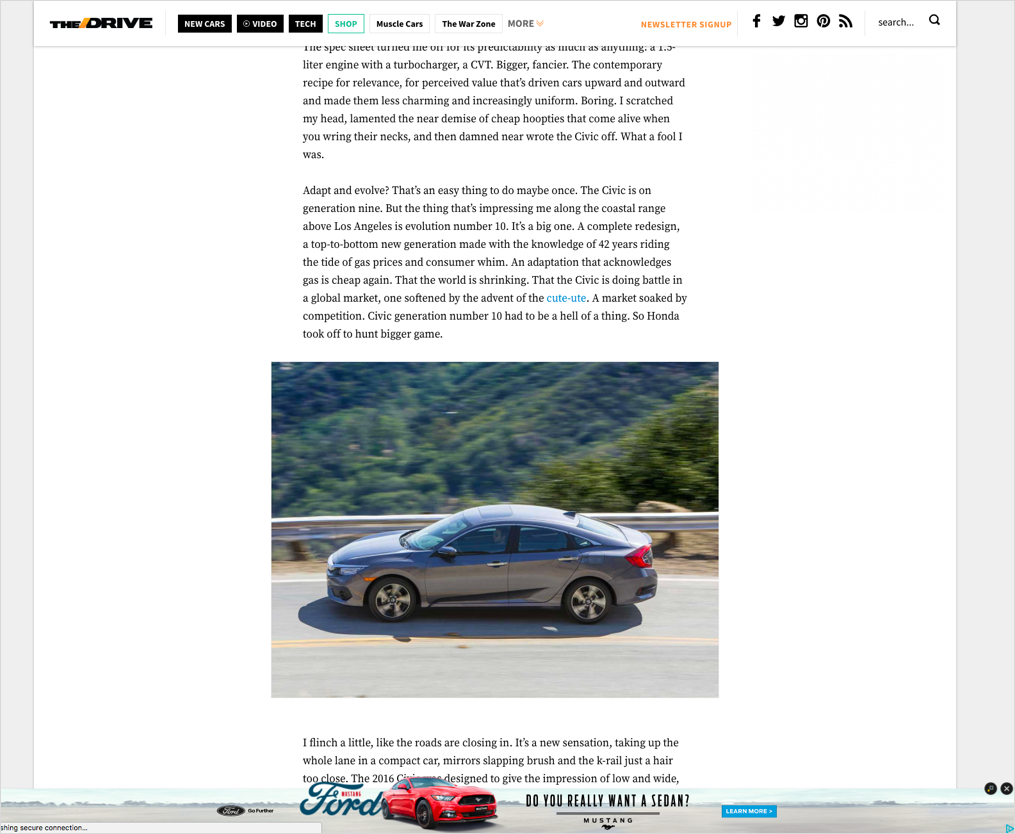 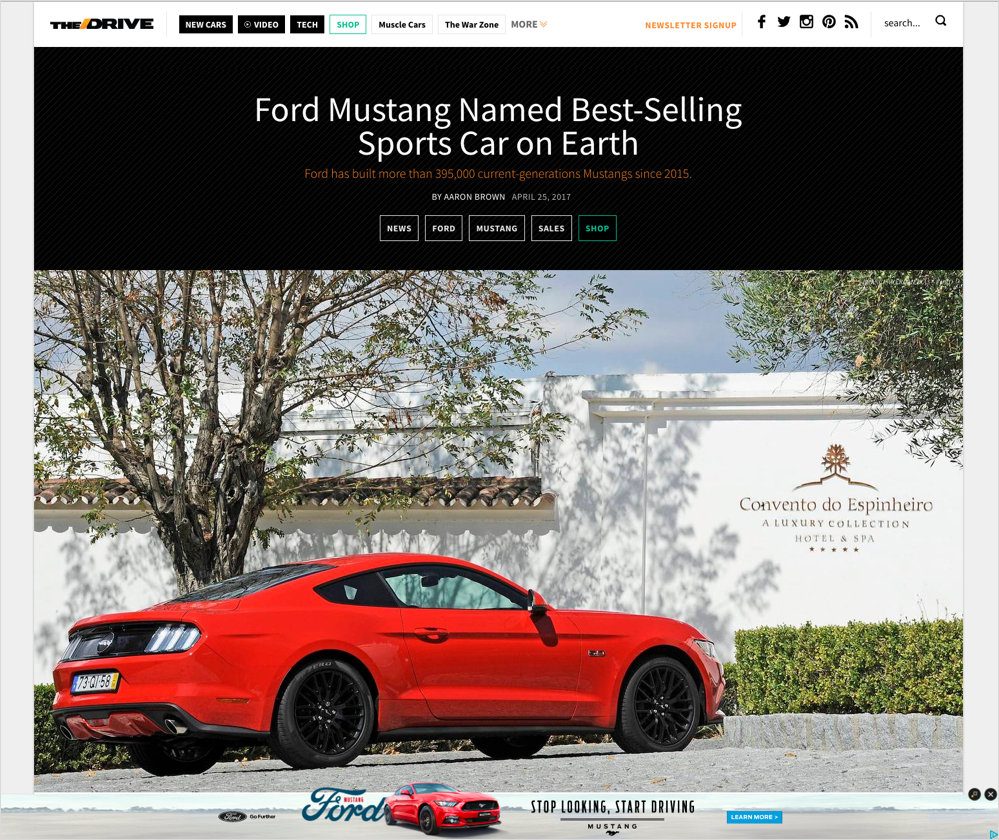 One tragic way people waste their weekends, especially in Melbourne, is attending Auctions for ‘fun’. We saw this as the perfect place for our Ditch Regret platform.

Partnering with activation agency Graffiti, we organised for a Mustang to loudly arrive at auctions in affluent residential areas. The driver would stop the car as people begin to mill about, get out an A-Frame with the message “Are you just watching or buying?  and place it at the front of the car. For the winning bidder (who was legitimately there to buy), we had a special reward. For taking the plunge and diving into the insanely expensive property market, we’d give them the Mustang for the day. 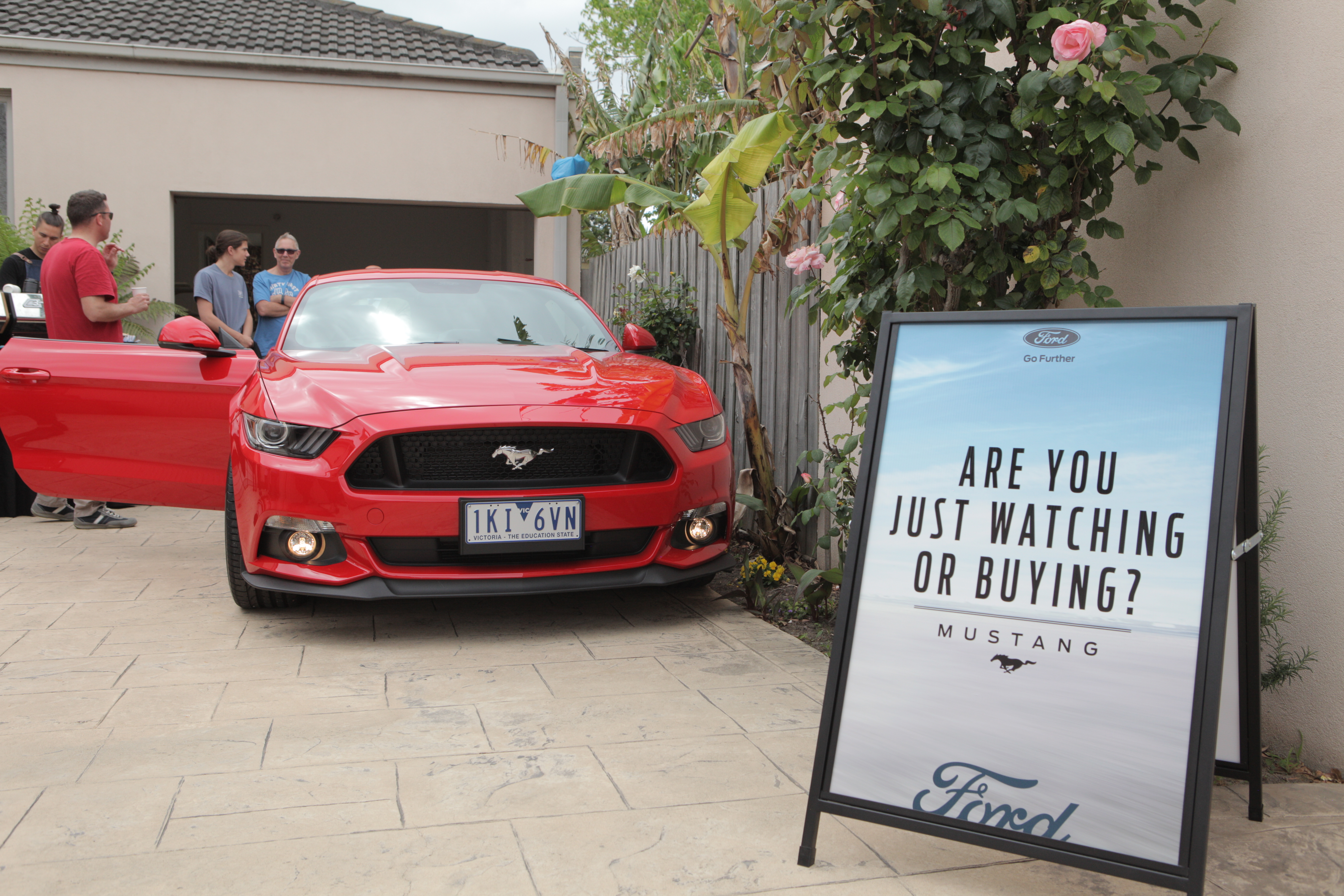 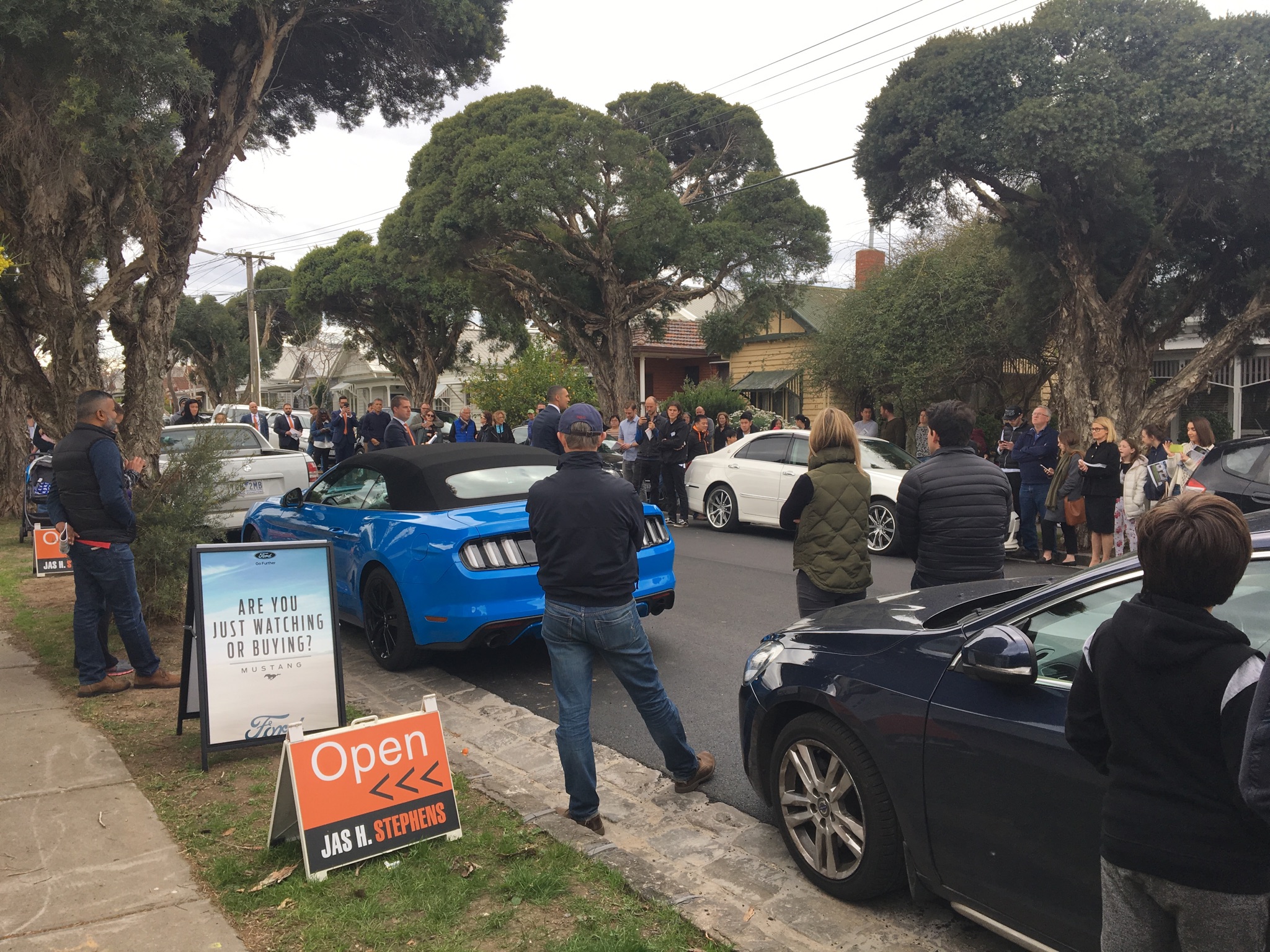 To hit another section of our target audience, we partnered with Pedestrian to create two pieces of native content. First ‘The Rutbuster 5000’; which allowed our audience to asses what lifestyle rut they’d fallen into others, then offer a suggestion on how to dig your way out of it. 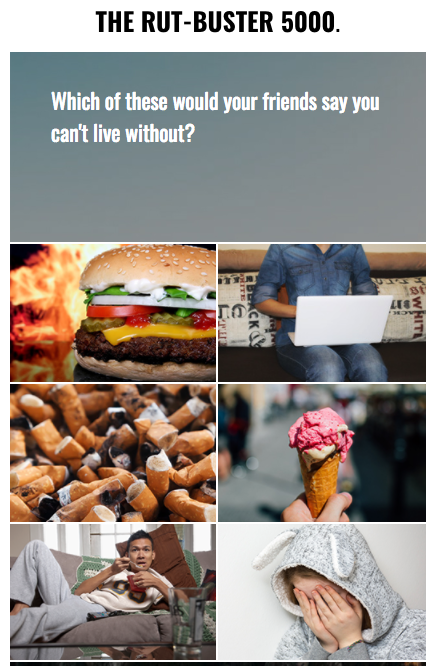 Secondly a piece of video content where we saw a member of their editorial staff stuck in a serious rut of mundanity, given a chance to fang her way out of her funk in a brand new Mustang.